You are here: Home / grocery savings / war on waste–creating your own recipes
Pin
Share
Flip
0 Shares 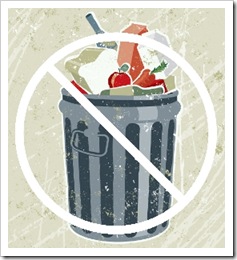 An important yet dying kitchen skill is being able to make a meal from ingredients lingering in the crisper. Being able to pull together a meal or do some baking using bits and bobs will prevent that food going to waste and will save you money at the same time.

While the best way to avoid food waste is to menu plan, sometimes life happens and you end up with food that needs using up in ways you hadn’t planned.

There are two essentials that will help you create your own recipes. The first is a well stocked pantry, freezer or garden. If you don’t have a few basic ingredients on hand you are limited as to what meals you can create or you are forced to shop for ingredients, wasting time and potentially money.

The other ingredient for success is a little inspiration. Reading recipes is one way to get inspiration and I’ll share with you a 21st century way of organising recipes and creating a menu plan next week.

In this post I will share the thought process I use to create and / or adapt recipes when I have ingredients that I want to use before they expire. The first recipe is the milk puddings with strawberry sauce from Monday, the second a basic moussaka.

I happened to have half a kilo of strawberries sitting in the fridge. As it’s strawberry season and strawberries are are cheap and local, we’ve been eating a LOT of strawberries lately. Maybe too many. Maybe we’re over-strawberried for the season because the strawberries in the back of the fridge had become quite mushy (but were still edible).

What do you do with mushy strawberries? Mush them some more, of course! Dessert was inspired not only by what was on hand but by it’s shortcomings.

Ok, so how do I make the sauce? Should I cook it or just blend it? Either option is viable, but I decided I wanted to concentrate the flavour of the strawberries by boiling them down – it’s still spring after all, so I wanted something halfway between summer fresh and winter warming.

Sweeten with sugar or honey? Honey has a distinct flavour and I didn’t want it to override the strawberries. I also wanted a warm malty flavour to balance the strawberry freshness that sugar doesn’t offer. Not to mention that we’re trying to reduce our sugar intake. Brown rice syrup would work nicely – malty and not too sweet, but there was none in the pantry. Hmm, what about maple syrup? (Ok, so not really healthier than sugar). Yes, still a little in the back of the fridge – we have a winner!

At this point I now consult the internet and read about half a dozen recipes online. They were all similar. A dash of lemon to balance the sweetness was a standard addition.

I then thought about what other flavours I could add. Vanilla? Cardamom? Strawberry liqueur? A little infusion of rosemary? All interesting additions but why over complicate things, right?

So that’s the sauce but what am I going to serve it with? Drizzled over ice cream would be nice, but we don’t have any ice cream (and the idea was to use what’s on hand) and the freezer is choc-a-block anyway.

But I settled on milk puddings – an easy, inexpensive yet impressive dessert that can be made with basic pantry ingredients and that has a creaminess that balances nicely with the sweet tang of the strawberry sauce.

It’s been years since I’ve made milk puddings but it’s simply a matter of setting flavoured, sweetened milk with gelatine or agar agar in a mould. I use your basic supermarket variety powdered gelatine – the directions on the box suggest 2 packets or 6 teaspoons of gelatine to 1 litre of liquid (just shy of 4 1/4 cups), so it’s simple enough to extrapolate appropriate quantities to feed your family.

How sweet? The easiest way to find out is to taste and adjust. Add a little syrup and taste, then add a little more.

What flavours? Vanilla is always a nice addition to anything so I went with that.

Dessert was created and the strawberries didn’t go to waste but were enjoyed in a new recipe.

moussaka with a twist

I recently committed the ultimate food waste blunder – I bought food with no real plan on how I was going to use it.

Not only that, I bought a vegetable I don’t even like!

Eggplant. They just looked so purpley-good and they were so cheap I couldn’t help myself.

Then I had to figure out how use them before they went bad.

Moussaka was an obvious choice. The mince would hide the eggplant. I had mince in the freezer and most of the other ingredients are pantry staples.

This time I did use this specific moussaka recipe as a starting point and guide. Here’s how I adjusted it to suit:

The eggplant was the impetus for the dish, but really the mince was the main attraction – if I didn’t have eggplant I still could have made this dish with zucchini (or neither!)

The rest of the ingredients are pantry staples: onion, garlic, potatoes, dried herbs, spices, tinned tomatoes, butter, milk, flour, egg, tomato paste, cheese – these ingredients are ones I always have on hand.

As this was my first attempt at moussaka, the original recipes acted as a general guide to cooking the dish. The more you cook though, the less you have to rely on recipes.

What I hope to show is that rather than wasting leftover ingredients, those ingredients can be the impetus for creating your own recipes that may go on to be family favourites. A little inspiration and a few pantry staples will mean you always have a meal, no matter what’s lurking in the fridge.

The content on this website is general in nature and is for informational purposes only. It does not constitute professional advice. You should always seek the advice of a professional when making financial decisions. While every effort is made to ensure accuracy, details are subject to change. Please check appropriate websites to ensure information is current and correct.
We use cookies on this site to personalize content and ads and to analyze traffic. Learn more about cookies and how we use them and how to disable them in our full privacy policy. Accept and CloseRead Full Privacy Policy