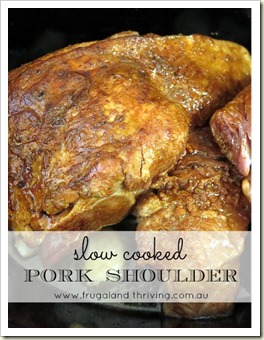 Pork shoulder is one of the more inexpensive cuts of meat, making it a great budget choice. It is perfect for slow cooking, which means you’re saving time as well as money.

The other way to save money on the groceries, besides buying economically, is to reduce waste.

But cutting waste is more than just eating what you buy before the use-by date – it’s about going back to the old-fashioned ways of using every edible part of an animal or plant.

In this series, I’ll be writing about how to get even more value from your humble pork shoulder by:

We pick up a pork shoulder for around $15 from our local butcher. For two adults and two children, we get 4 meals worth of meat (that’s $3.75 per meal) and we usually have enough leftovers for a couple of lunches as well.

And when you make stock and lard from what would often otherwise be thrown away (both of which are not cheap to purchase from the supermarket) you’re getting even more value for your money.

Today’s post is about preparing and cooking your pork in the slow cooker.

Prepare the pork shoulder the day before you want to cook it so that the spice rub has time to flavour the meat.

When you buy a pork shoulder, the skin and fat layer will be intact. 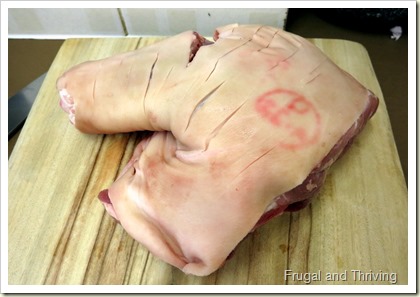 While crackling is one of my most favourite things, the skin doesn’t crackle in the slow cooker, so the first thing to is to remove the skin.

I’m going to be frank here, removing the skin is not the most fun you will ever have – it’s a bit of a fiddly job. If you don’t want to cook it for crackling or render the lard, you might ask the butcher to remove it for you, this will save you a bit of time and effort.

To remove the skin, make a cut across one part of the shoulder and pull the skin, slicing between the meat and fat to remove. 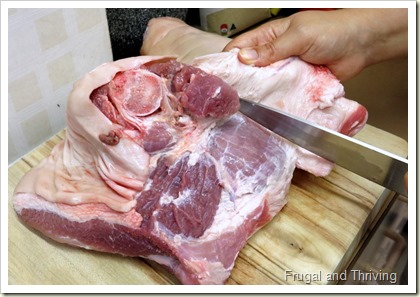 A good pair of kitchen scissors makes this job sooo much easier. It takes about 5 minutes using the scissors. 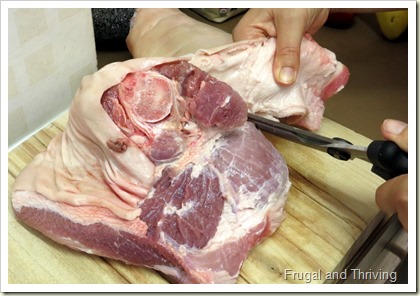 Remove all of the skin and as much fat as you can. Your shoulder should now look something like this: 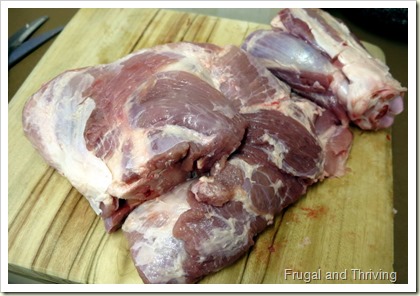 Using the spice mixture in the recipe below, rub the pork shoulder all over with the mixture, making sure you get it into all the nooks and crannies. Place the shoulder in a covered container and leave in the fridge overnight. 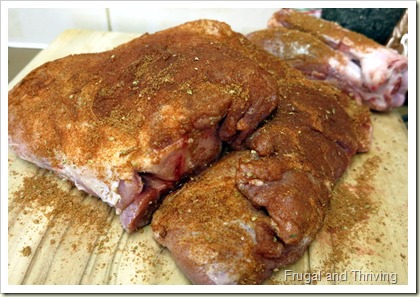 what to do with the skin

If you want to make crackling with the skin, rub it all over with oil and salt and put it into a very hot oven until bubbling and crisp, around 40 – 50 minutes.

If you want to render it into lard, and I’ll be covering how to do that later in this series, then cut it into small pieces (again a good pair of kitchen scissors make light work of this, but I’ve also used clean pair of $3 paper scissors as well) and put it into a container in the freezer.

Rendering takes a while, so it’s a good idea to collect the skin and fat of several pork shoulders before rendering or buy some extra rind (can be purchased for less than $1 a tray at the supermarket) or fat (see your butcher) to make the rendering worth your while.

In the morning, throw a roughly chopped onion into the bottom of your slow cooker and then heat a frying pan and add a little oil (lard is good here) until hot and brown the pork shoulder on all sides.

Place the shoulder on top of the onion and then add a cup or so of stock and any juices from the container. You can use the stock to deglaze the pan first before adding it to the slow cooker. Beef stock will do, but I use pork stock, made from previous pork shoulder bones.

Cook on low for 8 hours or so, until cooked through and tender. 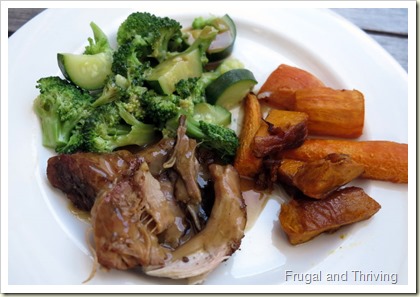 To make the tastiest gravy ever, heat some oil or lard in a frying pan and add an equal amount of plain flour (arrowroot flour makes a great gluten-free flour alternative). Cook the flour for a few minutes and then ladle the liquid from the slow cooker pot, a little at a time, through a fine mesh sieve and into the pan, stirring well between each addition to prevent lumps.

Be patient, it will start out really thick and a bit lumpy, but keep stirring and adding just a little liquid at a time and the lumps will go. When you’ve got a thin gravy, bring it to the boil and then simmer, stirring, until thickened. You can thin down the gravy and mellow the flavour with leftover stock if you wish.

Serve with the gravy, some roast vegetables (in the picture there’s pumpkin, sweet potato and carrots) and steamed greens.

Remove the leftover meat from the bone and shred using two forks. You should have a heap of leftover pork. 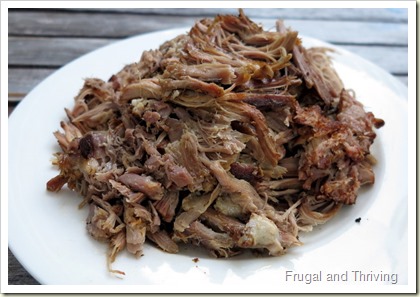 Divide the pork into meal sized portions and freeze for later. Later in the series, I’ll share our recipe for pulled pork and refried bean enchiladas as well as give some other ideas for how to use the leftovers.

a good grind each of salt and pepper

METHOD – THE DAY BEFORE

TO MAKE THE GRAVY

The content on this website is general in nature and is for informational purposes only. It does not constitute professional advice. You should always seek the advice of a professional when making financial decisions. While every effort is made to ensure accuracy, details are subject to change. Please check appropriate websites to ensure information is current and correct.
We use cookies on this site to personalize content and ads and to analyze traffic. Learn more about cookies and how we use them and how to disable them in our full privacy policy. Accept and CloseRead Full Privacy Policy